The story of Volkswagen campervans dates back to 1950 and the design of the Type 2 VW Transporter. The concept was to create a viable work vehicle as a larger alternative to the VW Beetle car. Over the years several versions of the VW Transporter have been created, with the VW Campervan emerging as a favourite, widely regarded as a classic vehicle. 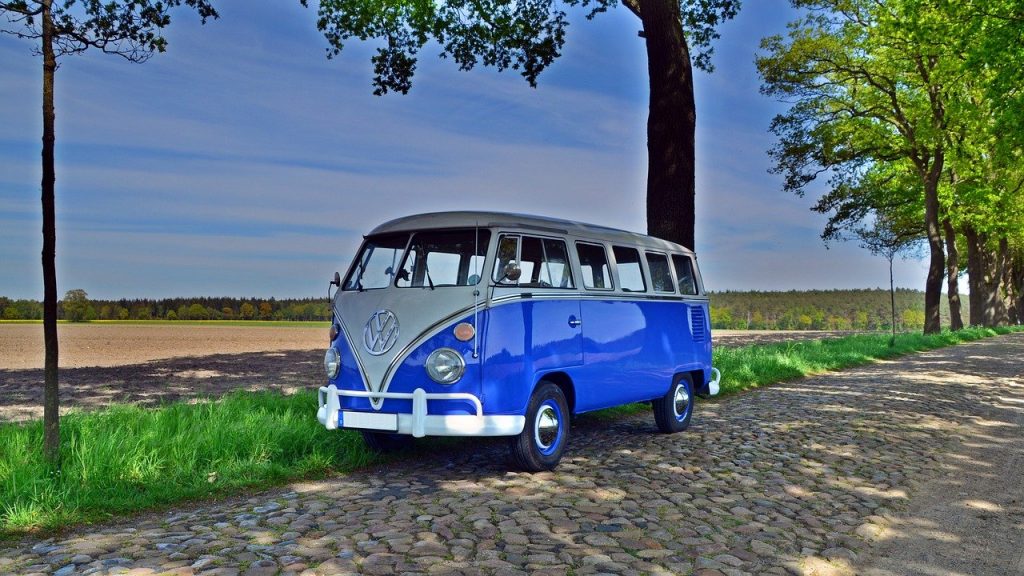 The 1950 version of the vehicle was created based on a sketch by Ben Pon, a Dutch businessman, after a visit to the Volkswagen factory. The drawing was inspired by a parts-mover he had seen during his visit that gave him the idea of how the successful VW Beetle could be developed into a vehicle for commercial use.

The first Volkswagen T1 Transporters were built in Wolfsburg, a city heavily tied with Volkswagen. The first design of the vehicle included a distinctive split windscreen and included a number of variations over the years. 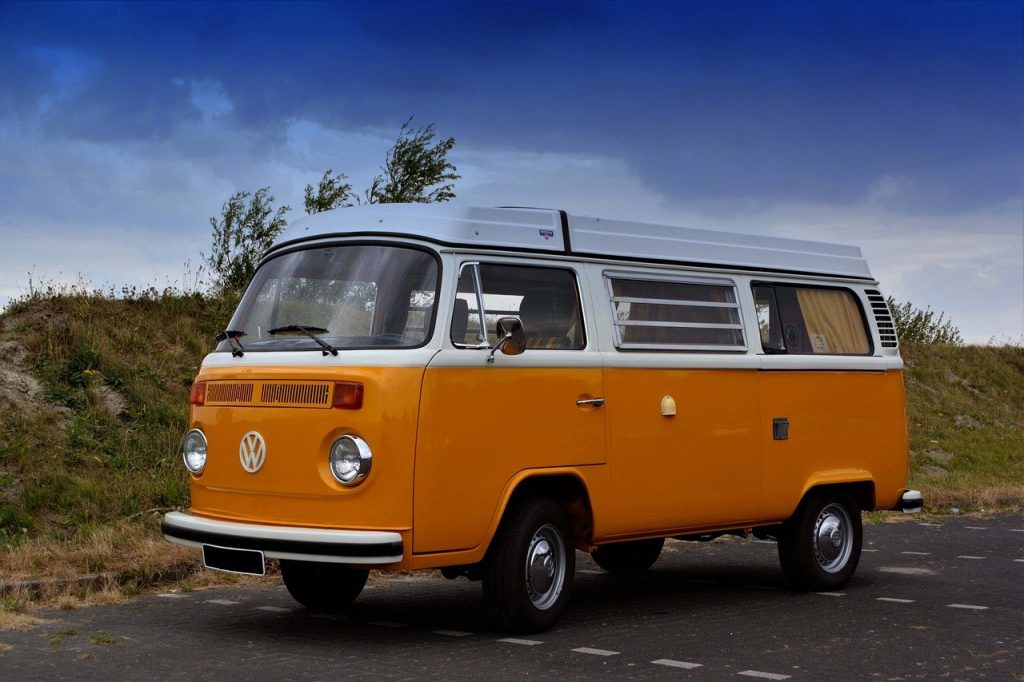 Following on from the success of the T1, the T2 Transporter, also known as the ‘Bay Window’, was released. This version done away with the split windscreen of the T1 and increased the overall size and weight of the vehicle.

Upgrades to the vehicle included a larger engine, new wheels, and side-bars that could be used to step in and out.

The vehicle grew larger in size and weight again and had a design that was much squarer than the previous versions that had more rounded features. There were a number of new features in this version, including; power steering, air-con, heated mirrors to name just a few.

This 4th generation VW Transporter had a number of options, which included; standard or high-top roof, sliding doors, short or long nose at the front, and a permanent four-wheel drive system. This version proved to be an extremely popular version to build campervans from the base.

This version of the vehicle was available in a wide range of variants, including a short wheel base and long wheel base, with low, medium and high rooflines to choose from.

There was an upgraded version of the T5 created that provided a facelift to the vehicle. The front of the vehicle received cosmetic changes and there were other small changes such as traction control and the addition of daylight running lights. However the most significant change was the engine being upgraded to 180bhp.

The sixth version of the vehicle was modernised to feel more like a car than ever before. The aesthetic changes to the vehicle include a new design for the front of the van and a larger rear window. The vehicle is also 15% more economical when it comes to fuel consumption and has a 7-speed automatic gearbox option.

The Future of the VW Transporter Campervan

It’s not certain what we can expect from the T7 version of this vehicle, Volkswagen often release futuristic designs as a teaser, however, these are often made more ‘normal’ when a vehicle is released so it is hard to know what will come next. 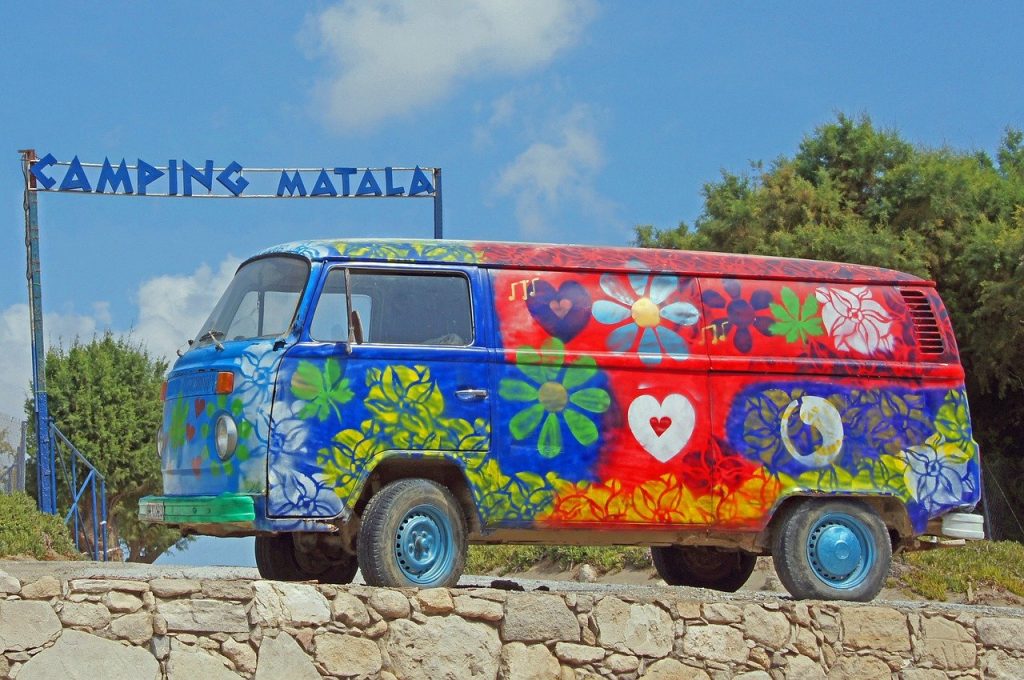 The Volkswagen Campervan has become synonymous with the hippy counterculture of the 1960s. The extent of these ties was demonstrated in 1995 when Jerry Garcia, lead singer of the Grateful Dead, died and Volkswagen ran an ad that featured the VW Campervan with a tear running from one of the headlights.

In the 1960s the VW Campervan became a symbol of protest, often covered in psychedelic designs and slogans, earning them the nickname “hippie bus”. Part of the appeal for young people that feel they were part of the counterculture was the fact that the boxy design of the VW Campervan was so different from anything else on the road, particularly anything that was being made in America at that time.

The practical applications of the vehicle also helped its popularity as it was used to transport people to protests, rallies, polling stations and festivals during a decade of both cultural and political change.

The VW Campervan was also useful to those that wanted to make a difference in their community. A prime example of this is its use by civil rights activists Esau and Janie Jenkins in South Carolina who used their 1966 Volkswagen Transporter to take African-American children to school and adults to their workplace in the segregated South of the United States.

Benefits of a VW Campervan

Hire a Volkswagen Campervan For Your Next Adventure 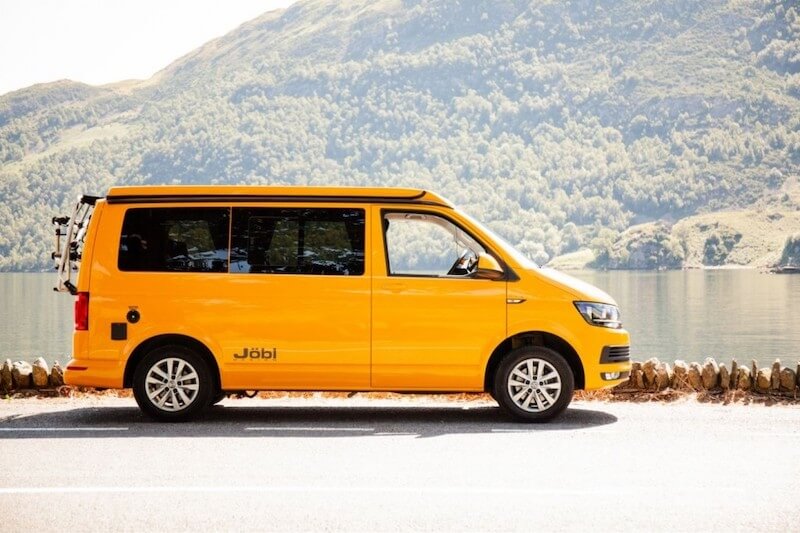 We offer the modern, stylish and practical Volkswagen Jöbl for hire, an ideal vehicle for getting out on the road and exploring. It’s 4 berth, so perfect for a small family or group of friends setting off on an adventure together. The VW Jöbl comes with all the essentials that you’ll need to make your trip comfortable, including heating, hot and cold running water, and a gas powered 2 ring stove & grill so you can cook hot meals. The way the vehicle has been designed to be as similar to a car as possible makes it very easy to drive. You can find out more about the VW Jöbl here.

Get A Quote
GET A QUOTE
Scroll to Top